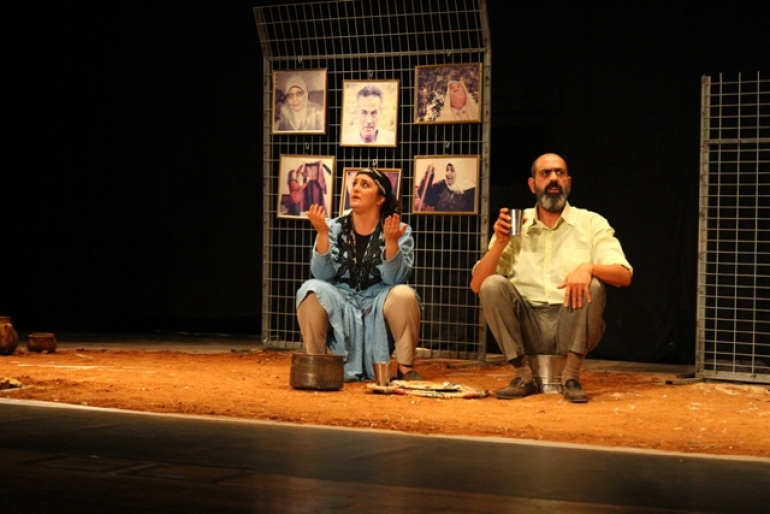 An old man and an old woman, refugees, expelled or displaced… it does not matter

What matters is that they are two Palestinians waiting to return to the homes which they were expelled from in 1948.

Here they are, dreaming of that day, thinking about their right to return to their homes. Sometimes they wait, other times they lose hope… but they keep on waiting…

The nostalgia boils in their hearts just like the Meramieh “Sage” boils on fire. The scent of Meramieh carries them to the homeland… where they lived.

They recall personal stories which are still rooted in their memory…

They take us in a journey travelling in their memories to go back in time to that historical era, to live with them their innocent childhood, which was ruined by the Nakba “The Catastrophe of 1948”.

Dramaturgy and Directed by: Mirna Sakhleh

Based on the book: Living Memories “Testimonies of Palestinians’ displacement in 1948”

Translated to English by: Eid Batarseh

Funded by: The Danish House in Palestine

In 2017, Al-Rowat for Studies & Research published the book “Living Memories” – in partnership with The Danish House in Palestine – as the first fruit of the project “Testimonies of Palestinians’ displacement in 1948". The project aims to preserve Palestinian memory by gathering oral interviews from Palestinian men and women narrators with tenacious memories who were displaced in 1948 to elsewhere in Palestine (the West Bank, Gaza, or the 1948 areas) and the Diaspora (Jordan, Lebanon, Egypt and Chile). The stories cover events in a number of Palestinian villages, towns and refugee camps.

The six interviews published in this book are only a small selection from the collection of interviews documented by RSR. To date RSR has collected 114 oral accounts (with 61women and 53 men) in audio and video files.

The Play “Meramieh” was created as a piece of Verbatim Theater (a form of Documentary Theater) aspiring to contribute to the enrichment of the Palestinian narrative. It is rooted in the belief that when Palestinians narrate their own stories, they take part in the writing and reclaiming their own history.

The play is based on the six testimonies published in the book “Living Memories” which features the following narrators:

The director of the play Mirna Sakhleh edited the text of “Meramieh” through combining and integrating these testimonies, to focus on a particular historical era which is the Catastrophe of 1948 (the Nakba) and what accompanies it of harsh and cruel human experiences which those Palestinian refugees went through, as well as these human stories which intersect with the experiences of other refugees in the world until this day.